W. Ben Hunt (1888-1970) was an artist, craftsman, educator, researcher, and writer (see Ben's photo below). He produced approximately 20 books and over 1,000 magazine articles in his lifetime. The books covered a wide range of subjects: wood carving, leatherwork, silversmithing, beadwork, whittling, Indian crafts and lore, log cabin building and more. This body of work has been translated into 17 languages, a tribute to Ben’s skill and ability to share his knowledge and enthusiasm with other cultures. A book detailing Ben’s life and showcasing extensive examples of his work is available from the Hales Corners Historical Society.

In 1924, Ben Hunt, his brother, and father-in-law built a cabin (16 x 28 feet) on Hunt’s property on Janesville Road. They used only hand tools, beginning with sawing tamarack logs to size, right up to nailing down the last shingle. Over the years, additions were built from utility poles. The Cabin became a gathering place for Ben's friends to socialize and pursue their hobbies. Young people were welcomed to learn from Ben and share his interests. 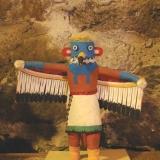 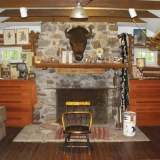 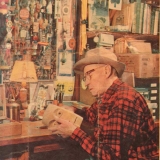 The Cabin will be open to the public on the first Saturday of the month from May to November 2022, 1-3 p.m.

Groups are welcome to schedule special tours at other times. There is no charge for tours, but donations are always appreciated. The Hunt Cabin may also be reserved without charge by non-profit groups that serve a civic, cultural or educational purpose. The Cabin reservation form is available here in PDF format. For information call (262) 349-4208 or email celine.elizabeth@sbcglobal.net